As you probably already know, I am a huge fan of Michigan Bulb Company.  They have great prices and a lifetime guarantee on their plants.  I received a couple of great coupon codes in my inbox, and I wanted to share them with you.


Note: To take advantage of any future coupon codes, you can always sign-up for free email alerts on their website.
Posted by Lina at 2:50 AM No comments: 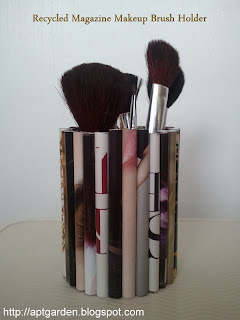 I finally got around to trying that recycled magazine project I blogged about earlier this year.  I decided to create a makeup brush holder by using pages from my Glamour magazine to decorate a tin can.  It was a lot easier than I thought, and it took me less than a couple of hours to complete this project.  Continue reading to see step by step instructions on how to create this makeup brush holder. 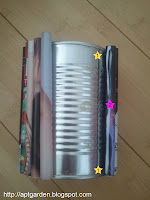 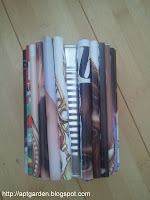 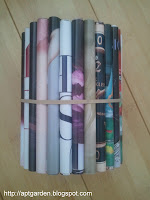 I love California for many reasons, but one of them is being able to garden throughout the winter!  Here are some of the things still growing in the garden in December: 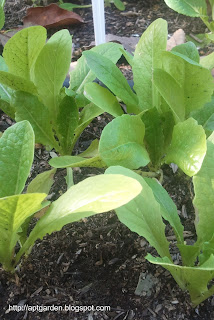 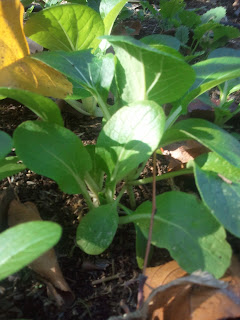 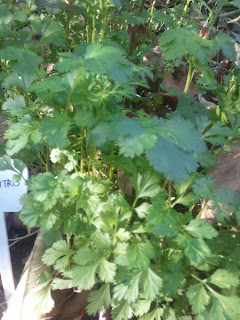 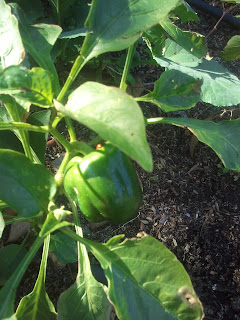 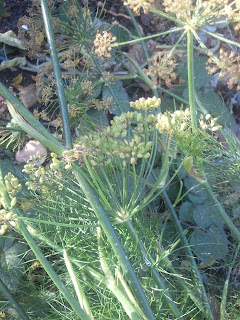 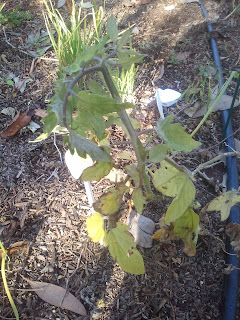 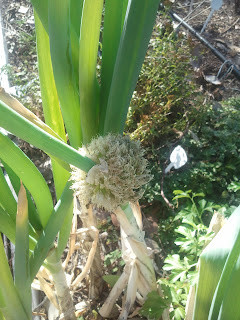 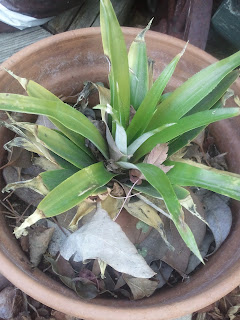 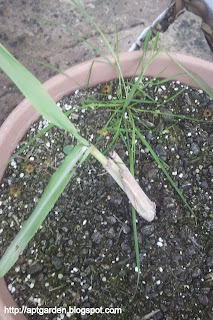 Photo: Lemon grass shoot given to me by a friend
Our zucchini plant was also still producing zucchini, but I uprooted it because the zucchini were small.  Carrots, onions, shallots and garlic are also still growing as well as sage, English thyme, lemon thyme, rosemary, parsley, and oregano.  Our lime tree is still flowering and setting tiny fruit.
In general, the plants are growing at a much slower rate.  I think next year I will try row covers or set up cold frames to see if that will improve growth.
Posted by Lina at 11:24 AM No comments:

Tarragon is an herb with a licorice-like taste.  The plant produces yellow flowers that eventually develop seeds.  See Photo 2 above.  To get the seeds, just break the dried flower heads.  The black slivers are tarragon seeds.
Posted by Lina at 3:11 AM No comments: 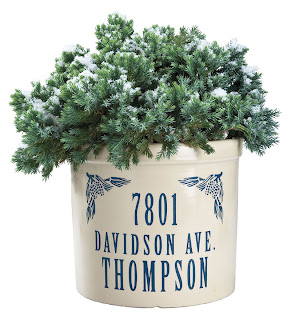 Personalized Address Planter ($59.95 + Free Shipping)
These personalized crocks would make a wonderful housewarming gift and a nice addition to your own home.  Personalize these crocks with your family name and/or street address and then set them on the porch or walkway.  Black, blue and green colored fonts are available.  They are currently $59.95 at Plow & Hearth, and you can get free shipping by using coupon code: PHFSN.  Other Plow & Hearth Coupon Codes Available Here: http://aptgarden.blogspot.com/p/savings.html.
Posted by Lina at 3:08 PM No comments:

One of my favorite magazines, Better Homes and Garden (BHG) has a Holiday Store! Currently, you can get $3.95 shipping on any order, any size.  You can shop by issue or by topic.  They also have holiday exclusives! For example, you can get 40% off holiday fruit boxes and get free shipping as well.

Email ThisBlogThis!Share to TwitterShare to FacebookShare to Pinterest
Labels: apartment decorating, gift, in the kitchen

Cover Those Gray Roots in a Pinch


So you are getting ready for a hot date or an important meeting, but as you are primping yourself in the mirror all you can see are those pesky gray hairs staring back at you reminding both you and the world that you are not that young anymore.  Well, here's a quick, inexpensive tip for covering up those gray hairs in a pinch.  All you need is eye shadow in the same shade as your hair color, an eye shadow brush, and if you wish some hairspray.

Email ThisBlogThis!Share to TwitterShare to FacebookShare to Pinterest
Labels: beauty

These are so adorable, and a fun way to dress up your desk this winter.
They are crafted out of artificial grass so there is no need to water or maintain it.
They are under $5 each and shipping is free at Tmart.com

Glamour ran an article called "31 Days of Giving."  The article gives readers 31 ways to give back to people.  You can read the online version at Donating to Charity: 31 Days of Giving by Glamour.com.  The article inspired me to compile a list of ways to help our troops and their families in the spirit of Veteran's Day.


I planted pumpkin seeds in July, but as you can see our pumpkin was not quite ready for carving.  My daughter and I decided to carve the pumpkin anyways.  We were inspired by the jack-o-lantern in the Bubble Guppies episode about Halloween.  We both bonded over the experience, and were happy with the final product.  Next year, I will try planting the seeds in June, and will use a lot more organic fertilizer.
Posted by Lina at 5:32 PM No comments:

Email ThisBlogThis!Share to TwitterShare to FacebookShare to Pinterest
Labels: harvesting

Photo: Christmas Cactus, Free Plant of the Month by freeplantsbymail.org
Free Plants By Mail (freeplantsbymail.org) was started by local growers as a way to use the surplus plants from nurseries and also as a way to support The Nature Conservancy.  Free Plants By Mail offers a new free plant each month.  This month they are offering Christmas Cactus.  Although the plant itself is free, you do have to pay a small shipping and handling fee of $6.95.
This organization also has over 100 plants available for sale on their site.  100% of the proceeds from the sale will go to The Nature Conservancy.
Click here to view Frequently Asked Questions (FAQ).

Send Postcards to Our Troops for Free

You can create and send a postcard to our troops by visiting: http://www.cosmopolitan.com/cosmo-kisses-postcard.  Cosmopolitan and Maybelline New York will donate $1 to USO for each postcard sent.*

Many of my family members and friends are in the military.  They do so much for us, and I know that they will appreciate the fact that we took the time to write them a kind message.  So please take a few minutes to show them your appreciation!

I love my cow mug! This little guy never fails to bring a smile to my face every morning!

I am also in love with Italian Sweet Creme flavored creamer by Coffee-Mate.  I wasn't a regular coffee drinker before, but I am now. 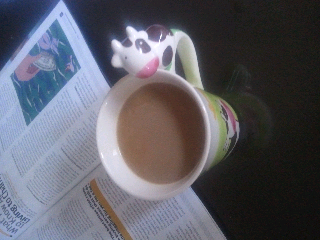 Email ThisBlogThis!Share to TwitterShare to FacebookShare to Pinterest
Labels: happiness


If you subscribe to several magazines like I do, you know that those magazines can easily pile up.  Perhaps this would not be such a bad thing if you actually read those magazines again, but let's be honest --- we rarely do.  So let's tackle that clutter in a smart way.

How to Create a Magazine Binder

Email ThisBlogThis!Share to TwitterShare to FacebookShare to Pinterest
Labels: organization

For apartment gardeners and people with small gardens, I suggest trying a worm compost bin.  The bins are cheap (less than $10), requires little square footage of space, and are easy to make.  You will also have finished compost in less time than you would with a traditional compost bin.

For those of you who are hesitant about keeping worm compost bins indoors, I promise you my bin did not have any bad smells or fruit flies nor did any worms every try to escape.  The key is to keep the bins under the right conditions.  This may sound difficult, but it is not.  The environment must be cool or warm (but not hot), moist but not soggy, and not overloaded with kitchen scraps.  Note: I only fed my worm bin broken egg shells, fruit and vegetable scraps.  I also chopped or crushed scraps when I could to accelerate the time it took to get finished compost.  I also placed a layer of moist, shredded newspaper on top of my scraps to prevent fruit flies from discovering my bin.  If you notice the bin getting soggy, you can give the liquid to plants or place shredded newspaper at the bottom to absorb the liquid.

Outdoor Worm Compost Bin
Now that I have more space, I created a large worm bin and placed it outside near the back door.  I love it!  The worms quickly break down all my scraps.  It is important to keep a thick layer of moist shredded newspaper on top of the scraps to keep the fruit flies to a minimum.  See Photo 1.  The fruit flies do not hurt the worm bin; They actually help break down the scraps.  I just try to discourage their presence because they are annoying.  Make sure you keep the medium moist or else you might attract ants. If ants ever attack your bin, just use a hose with a mister attachment and moisten the scraps and newspapers.  The ants should disappear in a day.

I am considering creating a second bin.  The bins are easily stackable because I drilled holes on the sides of the bin instead of on top.  My adult red worms have already produced several baby red worms so I will have plenty of worms for a new bin.
Posted by Lina at 3:14 AM No comments:

My marigolds are dying back in the garden and the stems have turned brown, which means it is time to harvest the marigold seeds.  Collecting marigold seeds will take very little time and effort, and you will end up with an abundant supply of marigold seeds.  Share them with friends or grow them next year from seed.
Marigolds are easy to grow from seed, are pretty, drought-tolerant, and are very hardy plants.  I plant marigolds throughout the vegetable garden because the roots secrete a substance that kills nematodes.  The smell of marigolds also deter some pests that munch on other crops (e.g., whiteflies).
How to Collect Marigold Seeds
Materials:
Directions:
Posted by Lina at 2:50 AM No comments: 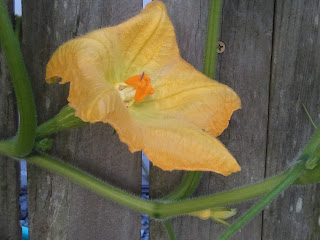 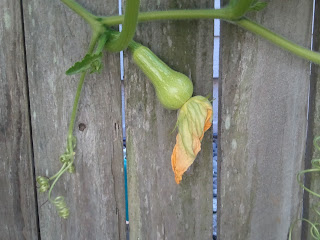 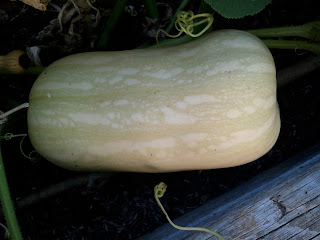 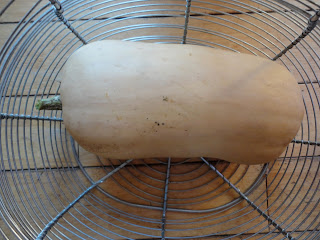